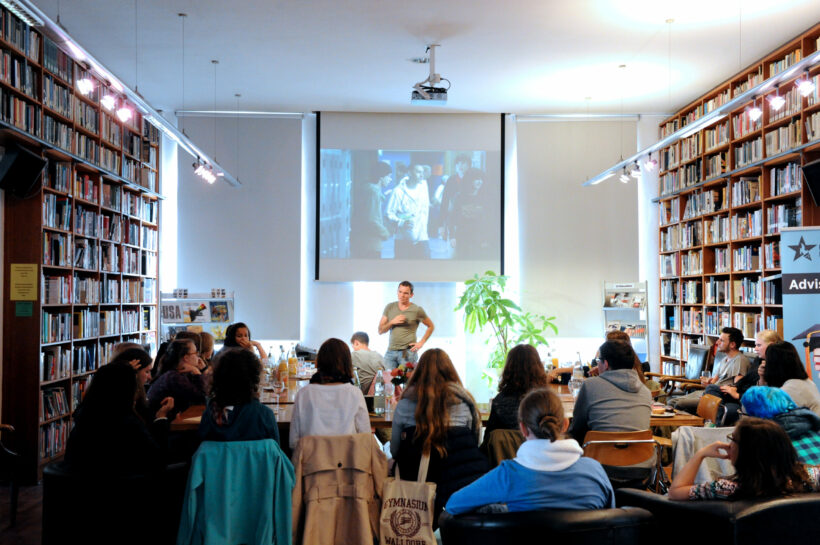 If a young person seeks to express himself creatively through writing, a low-threshold infrastructure is not to be found. Those who like to dance, who like to make music, who like to act can express their passion and talent together with other like-minded people. On the other hand, those who feel called to write and express themselves artistically with words are left to their own devices without support and group connections.

The DAI is now addressing this socio-cultural deficit. In October, the new Writers’ Room Labs project Writing Series Scripts started with selected young people. With the revolutionary US-American method of the Writers’ Room, young people are offered a platform where they can live out their talent with like-minded people.

Positive experiences with the thematic focus on creative writing enable our house of culture to continue on the path we have chosen, as the various formats are all very successful. For example, the fire of the poetry slam has been rekindled time and again since the 1990s by the poets and the audience in regularly sold-out halls, the project “HD-Ink – Ideas on Paper” for children with an immigrant background has been steadily expanded and, last but not least, findings from the screenwriting series project in the Writers’ Room for talented adults of all ages, which is unique in Germany, have been transferred to the new offer for young people.

In concrete terms, the financial support of the Baden-Württemberg Foundation will enable the DAI to offer monthly workshops for 25 young people over a period of two years, each of whom will work on different scripts for youth series in five Writers’ Room Labs. The young people will be taught and accompanied between workshops by a tutor with experience in screenwriting, the Writers’ Room method and film production.

According to the Writers’ Room concept, a team of scriptwriters creates challenging and entertaining new series and films, which are characterised by a high degree of realism as well as a high quality of the narrative material, precisely because of the work in the collective and the bundling of individual strengths. In the development of plots and individual characters, each member of the writing group (Writers’ Room) is called upon in his or her own individuality and personal cultural experiences. An immigration background becomes an obvious enriching advantage factor for good stories.

The plan to make the scripts real by acting or filming inspires the motivation and creativity of the young people. This idea is quite realistic when you know that private or public broadcasters are desperately looking for good scripts, especially in the area of series for teenagers and young adults, and even the award-winning British hit series “Skins” was written by authors with an average age of 21.

If a young person seeks to express himself creatively through writing, a low-threshold infrastructure is not to be found.

Extract of the events