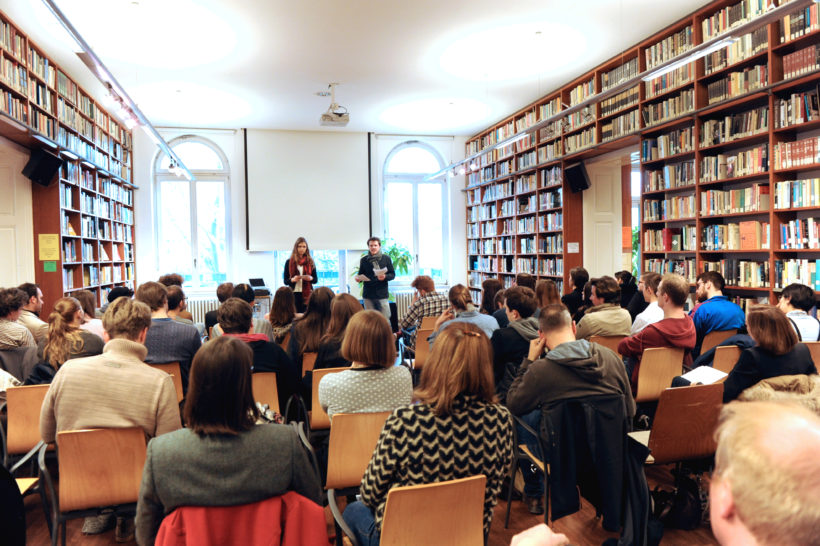 DAI Heidelberg is planning to set up a professional Writers’ Room experience between the months of May and August 2016 to create a 8×40 minute episode mini-series, constructed to leave options for continuation. Therefore we are looking for five screenwriters who’d like to participate in this experience.
Writers get a monthly stipend amounting to 4.000 € for the four months the project is on. The group is to meet twice a month for the four-month-period. In addition there will be skype sessions and individual work in between meetings … with the plan to have the bible ready to present in early September.
The project is designed so that dedicated writers could continue to work on other projects at the same time that they fulfill their commitments to the WR work.

At a later stage of the process, we may request some scene submissions.  We will give those details at the appropriate time.

We will announce the team of authors no later than May 10th.

‘THE DREAM OF EUROPE’ (working title)

We are aiming to create concepts, story worlds, characters, relationship arcs, plot lines and subplots for what would be an 8-episode season of a multiple through-line character drama set in various locations in Europe. The series will weave together a number of the critical issues facing Europe today. The idiom/style will be realistic and uncompromising (The Wire, Spiral), with very complex characters who will develop as the series progresses.  The many characters in the interweaving plot lines will represent a wide variety of authentic European perspectives and voices, as the concept and the plot requirements demand. Thus, we naturally look for authentic variety in our writers and their experiences.

Europe has reached a crisis point, or multiple crisis points: north v. south, east v. west, center v. periphery, rich v. poor, left v. right, ‘ethnically’ European v. newly arrived.  There are also Europe’s historical and contemporary visions and myths of itself that are often in contrast with its realities.  The first phase of the Writers’ Room will entail turning issues into dramatic realities through the brainstorming process.  Of course there will be a selection and focusing.  We aim for a tight, multilayered drama.  It will by all means not be a dramatized talk show! The work will proceed as though this were a contracted ongoing TV series.  A group of advisors to the project will act in the role of network heads and executive producers.  The eight-episode season we propose to create should not be seen as a mini-series, but as the first season of an ongoing internationally-marketed series.  We hope to create a second phase to the project that will enable all of the writers to write full episodes within the Writers’ Room format.

Further details about the potential marketing of the project with the team of writers attached, as well as rights, protections, and other contract issues, will be discussed at the Finalist Round of the applications.